European CFO route to the top

An analysis of the background and experience of CFOs in the 10 major European indices. From SpencerStuart. What stands out about this research is that roughly nine out of 10 CFOs in Europe do not have an accounting qualification, and half come from a non-finance background. This should force us to re-examine what skills are required of a CFO in the modern workplace.

Introduction
Spencer Stuart continually analyses the profiles and backgrounds of CFOs in leading European companies. By combining our detailed knowledge of CFOs and their career paths with data in the public domain we are in a unique position to share insights into CFO appointment trends. This report contains our latest findings.

Over the past five years, 12% of companies have changed their CFOs each year on average, although there was a spike at nearly 20% in 2018. Despite the apparent urgency with which companies are seeking to increase the diversity among their senior executive ranks, the number of women in senior finance roles remains alarmingly low: just 15% of CFOs in our sample are women. In other respects, too, our data suggests that public companies are becoming slightly more conservative as they appoint more people from outside the organisation who have prior listed company CFO experience. The average age of CFOs has remained constant at 52 years, with an average age of 46 at the time of appointment.

Methodology
In 2019, Spencer Stuart conducted research into the background and career trajectory of 372 CFOs serving the top 377 companies in 10 leading indices. 12 companies are dual-listed and five do not have a CFO. We exclude two Russian RTS companies that are listed twice (ordinary shares & preferred shares).

In some of our charts we compare our 2019 data with data from our 2013 CFO Route to the Top study which analysed the profiles and backgrounds of 254 CFOs from leading companies in France, Germany, the Netherlands, the Nordics, Switzerland and the UK. For Belgium, Italy, Spain and Russia only 2019 data is available.

The findings outlined in this paper are indicative of the data-driven approach that we take to advising clients and candidates. However, while trend data is useful it does not answer the question that clients often pose: “What is the ideal profile of a CFO?” A significant body of academic research, high-profile executive failures and our decades of professional experience placing CFOs and advising clients on finance leadership demonstrate that the conditions facing a CFO matter a great deal. It is not necessarily the case that high-performing CFOs – or other business leaders – can be successful anywhere, or that the perfect CFO exists, in theory let alone in practice. An executive’s performance largely hinges upon how well the individual’s capabilities, leadership style and expertise align with the specific nature of the role and situation, including the demands and constraints from the team, organization and business environment. For more on this topic, read: Context Matters: The Five Elements of Context That Most Impact Senior Leader Success.

If you would like further information on any of the issues raised in this report, or on any aspects of CFO succession planning please contact a member of our dedicated team of Finance Officer Practice consultants.

Combining the data from our research with our extensive experience working with the boards of many leading European listed companies on their CFO succession planning, we have identified seven key themes to consider in the appointment of finance leaders:

1. More companies are hiring from the outside

While just over half of the current CFOs (53%) were internal hires, there has been a gradual shift towards external appointments across the region. Given the relatively stable economic climate in recent years this shift is slightly counterintuitive; organisations in a steady state have historically been more inclined to appoint a continuity candidate, someone with deep understanding of the business and a strong track record within it.

At a national level, the most pronounced changes have taken place in the Netherlands where the proportion of CFOs appointed from outside the business increased from 44% to 60% between 2013 and 2019, and in France, where the reverse was true (29% external hires in 2019 vs 48% in 2013). 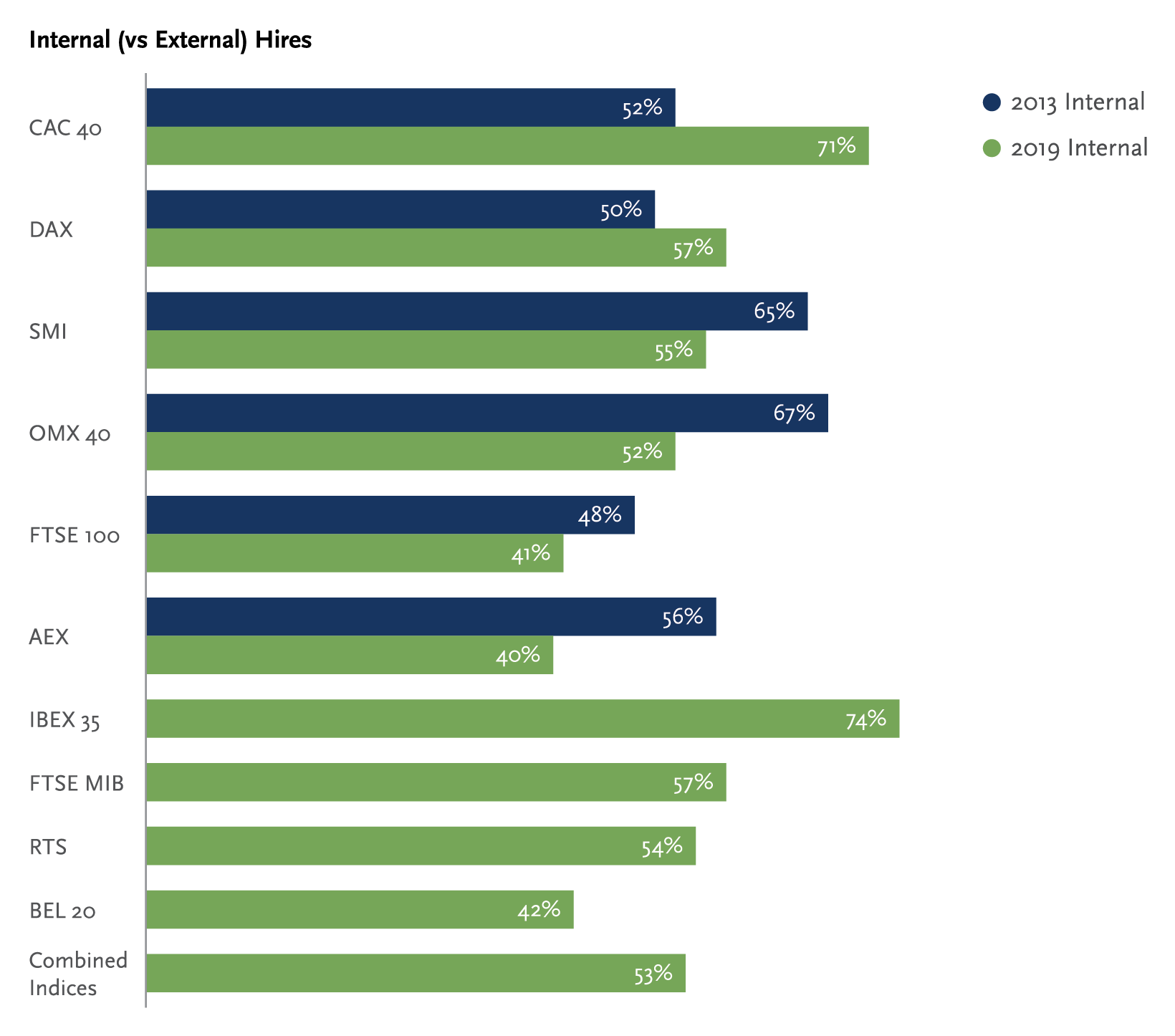 While many current CFOs have never held a Group CFO position before in either a listed or privately held company, there is a discernible trend towards hiring proven CFOs. This is consistent with the shift towards external hires for whom experience in the top finance job is likely to have been a major factor in their appointment. 42% of all CFOs and 70% of external hires had been a CFO before taking on their current role.

There is significant variation within the region, with over two-thirds of incumbents in France, Germany, Italy and Spain in their first CFO role. By contrast, 60% of Swiss CFOs and 50% of Nordic CFOs have previous experience, compared with 45% and 31% respectively in 2013. 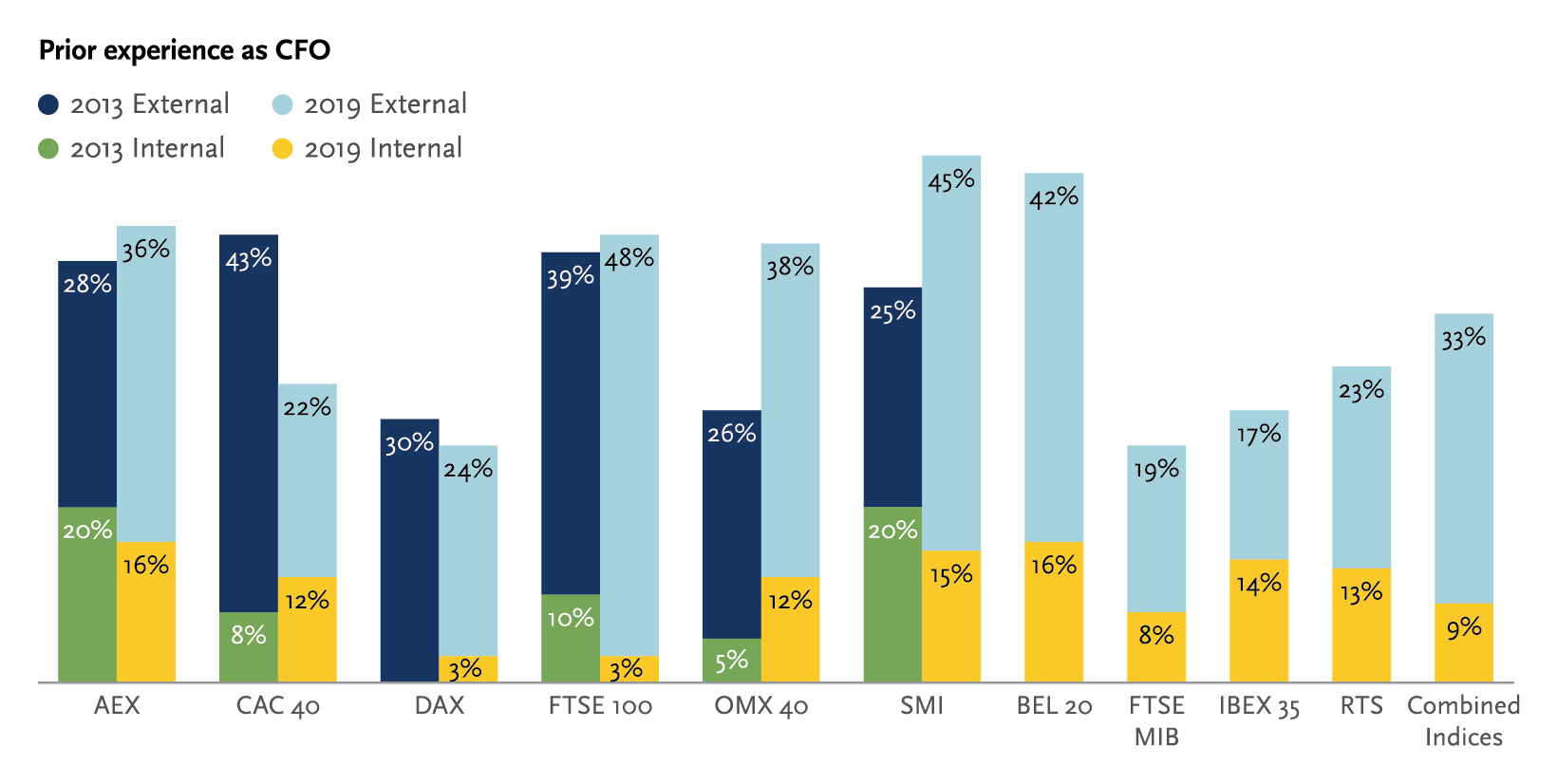 Today’s CFOs are more likely to have had direct exposure to P&L responsibility, either inside their own business or elsewhere. This is widely regarded as a vitally important step in preparation for a Group CFO role. Conversely, fewer CFOs have been a finance controller than was the case six years ago.

4. Most female CFOs do not have relevant industry experience

While the proportion of female CFOs in the region has doubled since 2013, today it is still low at 15%. Compared with their male counterparts, female CFOs are far less likely to have worked in the same industry – just 26% in fact. Companies are more willing to forego industry experience to introduce more diversity in their senior executive ranks. This is not in any sense a compromise; rather, it reflects an open-minded willingness to seek the best candidates from the widest possible pool of finance executives.

The average tenure of CFOs in our sample is 5.2 years. The tenure of female CFOs is lower at 3.7 years, which is a reflection of two trends: first, the fact that the number of female CFO appointments has risen over the past six (2013-19) years, and second, the fact that female CFOs are scarce and therefore being offered new job opportunities more quickly than their male counterparts.

Finance leaders are more international in terms of their mindset, experience and nationality than six years ago. A quarter of CFOs in our sample have a different nationality from that of the company they work for. In France, Germany, the Nordics and the UK there has been a marked increase in the number of CFOs whose nationality differs from that of the corporate HQ. The most dramatic shift in favour of non-nationals has taken place in the Netherlands, where the proportion of foreign CFOs has risen from 28% to 68% over the past six years. Non-nationals also account for the majority of CFOs in Switzerland and Belgium. By contrast, only around 10% of CFOs in Italy, Spain and Russia are non-nationals.

38% of CFOs have prior international experience, having lived and worked in at least one other continent outside Europe.

6. Investor relations experience is not essential

7. Qualified accountants are the exceptions in mainland Europe

Our evidence shows that in nine out of ten countries in our survey the overwhelming majority of CFOs do not have an accounting qualification, even though 42% of all CFOs have some professional services experience. The one exception is the UK, where 83% of FTSE 100 CFOs are qualified accountants. Most have previously worked for one of the Big Four auditing firms. Indeed, many UK boards appointing a CFO consider such a qualification to be a prerequisite. The reason for this is not clear and may have more to do with expectation and tradition rather than clear evidence of the link between accounting qualifications and superior performance in the CFO role. 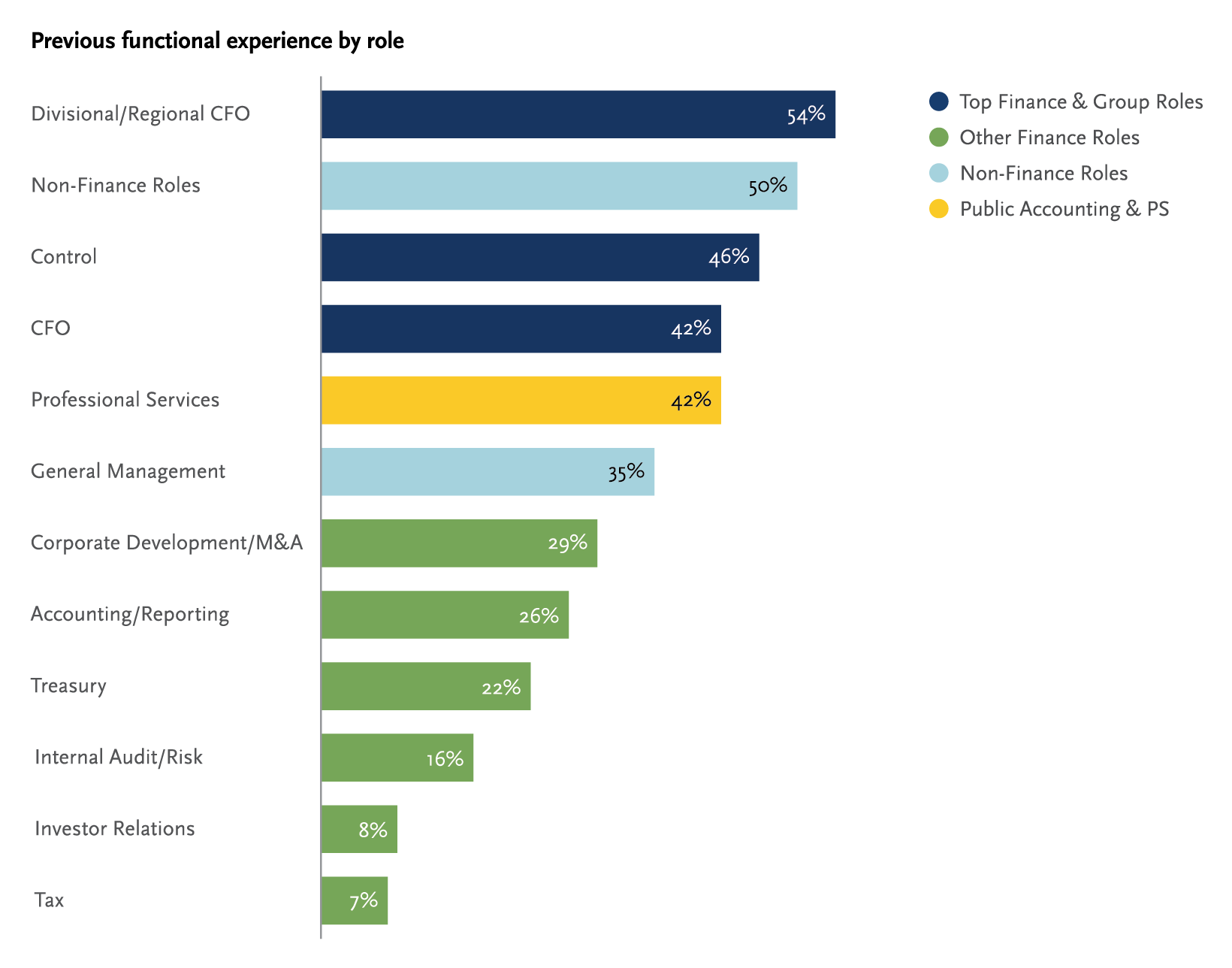 CFO Route to the Top

For an interactive look at the background and experience of CFOs at top listed companies around the world in 2019, visit https://www.spencerstuart.com/cfo-interactive.